I was delighted and honoured to be invited to join Lyn Christiansen, Makiko Tada, Hiroko Ojima, Jacqui Carey and Helen Vonow for this pioneering exhibition at the Wedeman Gallery, Auburndale, Massachusetts, US in February 2016. Lyn had been planning it for nearly twelve months, prepared an introductory booklet ahead of her Open Studio time close to the Gallery in October and received the work before Christmas to give them plenty of time to curate this.

In Lyn’s own words:

“The show wasn’t just about the pieces, as beautiful as they were but to have the viewer see this work as high quality expressive art. How the pieces were installed accomplished this. It took 3 weeks to install, starting with colors for the walls that would pop the work, platforms designed and built to build energy and flow between the works, special hanging devices to allow works to move and create shadows, and lighting to dramatize textures and emphasize the shadow effects.

The show was big….maybe 70 works. I had between 1500 and 2000 sq ft of space on 4 levels, (2 floors and 2 mezzanines) to work with. I also had paid staff for the installation and a number of volunteers. I viewed it more like a museum installation than a gallery show.”

I sent 7 major pieces, and 6 were hung. Oh, how I longed to see the whole exhibition! A very diverse use of such techniques that have developed from this Japanese traditional craft into new art forms. The scale too: from delicate intimate jewellery to major installations of emotional content. Fibres range from monofilament, paper, silk to felted wool, and more. I feel sure this will have raised the profile of Kumihimo to new levels.

There are more images available on http://wedemangallery.com/2016/01/03/twisted-again-the-new-kumihimo/

and the FaceBook page for the Wedeman Gallery, on a Japanese/American blog.

Sadly the exhibition had to close early because of the gallery’s water sprinkler system breaking in a deep freeze, and the gallery was flooded. All the work on the walls was ok, but Lyn and I both had pieces that were soaked. Fortunately I have sufficient materials to remake the two exhibits.

Fortunately some videos were made and the whole event has been enthusiastically received by all who visited and took part.

Huge thanks to Lyn and her team. 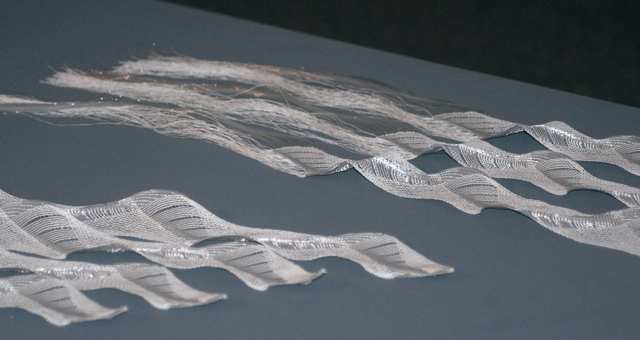 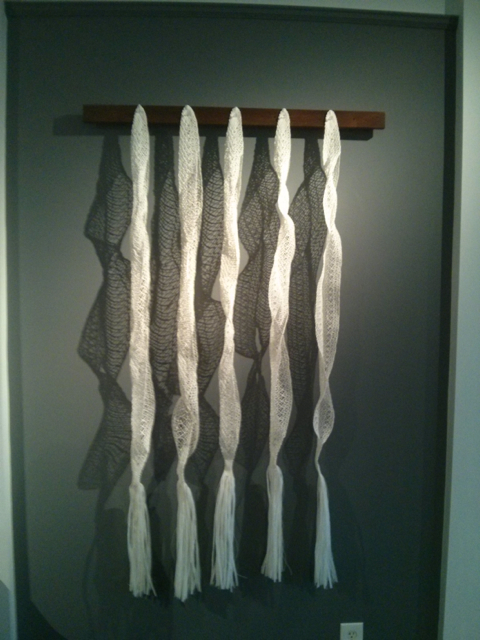